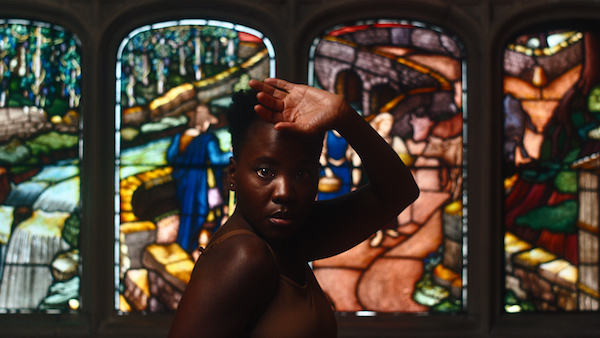 Nude Me/Under the Skin: A Resurrection of Black Women’s Visibility, a performance film

In September 2020, Enam was invited to deliver a live performance at Two Temple Place – an opulent neo-Gothic mansion on Victoria Embankment in London, commissioned by and built for William Waldorf Astor, in the 1890s. Astor emigrated to England from America in 1891 as, arguably, the richest man in the world, and he spared no expense on Two Temple Place, so the building provides a vivid narrative of his life and the endeavour of the remarkable craftspeople who shaped it. Inspired by the architecture, Freddie and Enam created a film in conversation with these surroundings. The film like her wider work explores the nuances of the Global North’s empirical history and its very direct effects on the Black British diaspora, in particular the women of this community. A timely conversation given the events of last summer which continue to call institutions and Britain’s history to question.

It is also a conversation between body and space. Between female form and that which has been sculpted by the male hand. Between brown skins, that which is of the earth.In so many ways the film relays the journey of black woman against patriarchy. She is but a ‘small frame’ against its suffocating expansiveness and yet the black woman (while she may not know it) overcomes it in her efforts to find light and joy. Her dance creates and nurtures life, it heals. She is mother to all.

Above all, it provides a moment of healing for a community whose past year has endured continuous emotional triggers and physical harm.

With thanks to the team at Two Temple Place and the fantastic crew.

The film has been selected for the Portland Dance and Aesthetica Film Festivals (2021) and Alchemy Film Festival (2022).

We invoke the Black. To Rest, an activation of Lynette Yiadom Boakye's 'Fly In League With The Night'