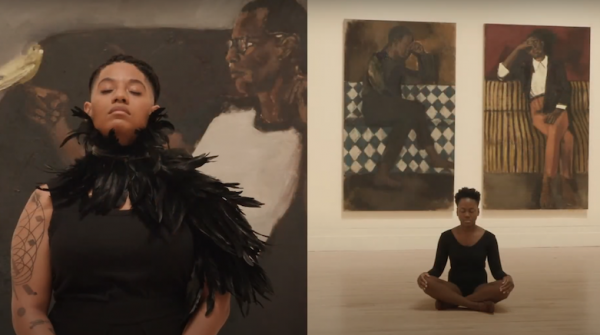 We invoke the Black. To Rest, an activation of Lynette Yiadom Boakye’s ‘Fly In League With The Night’

Lynette Yiadom-Boakye’s paintings often feature Black figures in moments of rest and stillness. Inspired by her work, and as a difficult and tiring year came to a close, this collaborative performance encouraged online audiences to experience a shared space of healing in Tate Britain’s galleries.

We invoke the Black. To Rest. was a collaborative performance with composer and sound artist Liz Gre.

In this fusion of sound and movement, an ode to Blackness and repose the two artists explore the challenges, trauma and inherent conflicts wrapped up in the relationship of those two entities. Blackness and Repose. The piece is both lullaby and call to action, it both seeks permission and gives permission for the space of restfulness to occur. It poses the question, what is rest yet in turn provides the response, rest is the freedom of being.

Thanks to the Young People’s Programmes and the Public Programmes teams at Tate Britain and Lynette Yiadom-Boakye.

Nude Me/Under the Skin: Unbinding a path to Black Women’s healing one pantyhose at a time

Nude Me/Under the Skin: A Resurrection of Black Women's Visibility, a performance film